THE MUSEUM OF KYOTO

There is another facility with the collection of movie related materials besides Eiga Bunkakan at Toei Kyoto Studio Park. 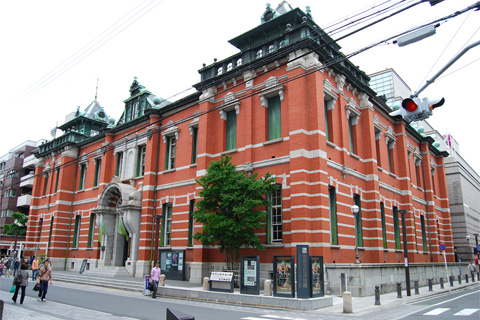 You will find a large Meiji style brick building on the crossing of Sanjo Street and Takakura Street. This building used to be the Kyoto branch office of the Bank of Japan and is designated as the important cultural property by the national government. Today, this building and a newly constructed building in the back compose the Museum of Kyoto. It was established in October 1988 to introduce Japanese history and culture. In 2011, the main building of the museum was renovated and its facilities were improved so as to attract more visitors. On the 2nd and 3rd floors of the main building are the permanent exhibits which includes arts and crafts of Kyoto and its historical materials. Special exhibitions on various themes are held periodically on the 4th floor and sometimes on the 3rd floor. The museum regards movies as a part of important culture of Kyoto and is equipped with a film library. There are many movie related events such as film shows and exhibitions which are well known to the researchers as well as movie fans. 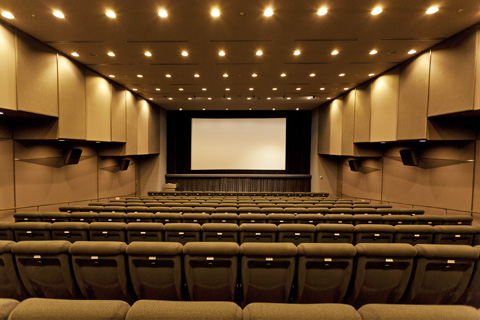 At the "Film Theater" on the 3rd floor, some Japanese classic movies selected from the collection by Kyoto Prefecture are shown in the afternoon and in the evening for six days a week from Tuesday to Sunday every month with different themes. You will enjoy these works in a good environment because they use the projector and audio equipments of the latest technologies. At the lobby of the theater, you will also enjoy the display of stuffs and description on panels related to the movie currently shown there.
The museum has a collection of about 3000 rolls of 800 titles. It also has a lot of other materials related to movies including 30,000 scenarios, plans of sets and personal mementos of people engaged in movie production. 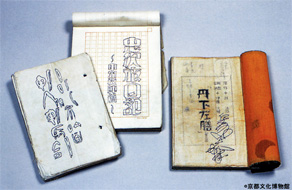 The movie "Momijigari" was one of the Kabuki drama shot at an outdoor stage in 1899. This is the oldest surviving film in Japan.
The Museum also has a collection of many materials belonging to famous figures. A movie director Daisuke ITO donated his personal materials to the museum which include scenarios of "Chogon", "Samurai Nippon", "Oatsurae Jirokichi Koshi" with his hand written memos on them. The cover of the script of "Chuji Tabinikki" was found out to be designed by Ito himself. 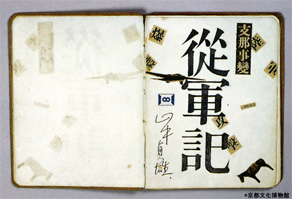 There are mementos of Sadao YAMANAKA who died early at the battle field and was called as a genius director. He had drawn a manga in a horizontal rectangle on each page of one of his dictionaries of his school days which resembles a movie screen.
His diary in the battle field in China says "I feel a bit sad that "Ninjo Kamifusen" becomes the last piece of my work. I do not say this as an excuse". A message-board-type letter contains a heap of messages from Chiezo KATAOKA, Mansaku ITAMI, Yasujiro OZU, Kazuo MIYAGAWA and others to encourage him at the battle field is shown here. 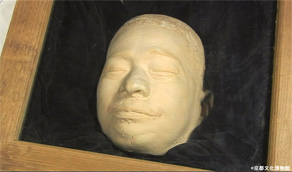 The death mask of Shozo MAKINO, Farther of Japanese Movie is displayed in a case.
The materials that belong to people who were engaged in movie production in Kyoto are sending us various messages today.
(URL http://www.bunpaku.or.jp/)

Every summer, around the time of the Gion Festival, the museum shows one film in its film theater. It's entitled Gion Matsuri (the Gion Festival). Produced in 1968, it was a major work featuring many popular movie stars of that time, including Toshiro Mifune. The only copy is in the museum's collection. This tremendous production is an invaluable piece of the history of the Gion Festival.
The Museum of Kyoto Film Theater occasionally offers unique programs unavailable elsewhere, including silent films complete with narration in the traditional style.