This is a large theme park featuring movie production in Uzumasa, the place once called "Japanese Hollywood". This park offers children and adults joyful experience in the movie related affairs and the opportunity to see the precious exhibits. 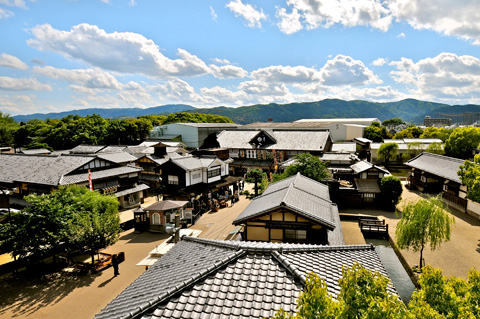 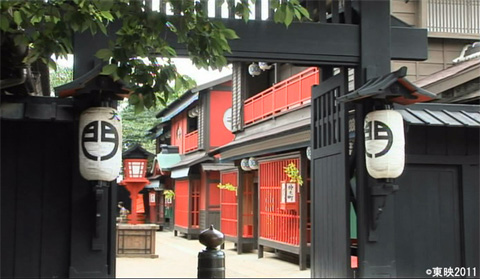 Toei Castle Gate stands on the main entrance of Toei Kyoto Studio Park. Next to the gate, there is a large entertainment facility called Padios and special exhibitions of a wide variety of content such as films, TV productions, and animation are held on its first floor. Outside the exhibition area, there is an outdoor set which is modeled after a street in Meiji Era. The old tram on this street creates a retrospective atmosphere of Meiji Era. This street was also used as Asakusa area in Taisho Era.
Today, this outdoor set is used for filming scenes of movies and TV dramas. Walking in the park, you may run into the shooting scenes of some movies. The shooting schedule is available on the website late in the afternoon of the previous day. Walking further down, you will find the "Edo Town" which includes a post station, Yoshiwara and Nihonbashi Bridge. They are the popular photo spots for cosplayers in particular. In addition, the park has leisure facilities including “Port Town” where a dinosaur may lurk in the water, “Nakamuraza Theater” where Ninja shows are held, and “Costume Rental Shop” where you can be dressed up as a princess or a samurai and walk around in the park. There are also a variety of workshops such as “Terakoya” where a period drama actor lectures on a lifestyle of Edo period and “Samurai Sword Fighting Lesson,” attractions including Ninja Mystery House, Haunted House, and Trick Art Museum and events such as hero shows, which will make you fully enjoy yourself with films.
(URL: http://www.toei-eigamura.com/) 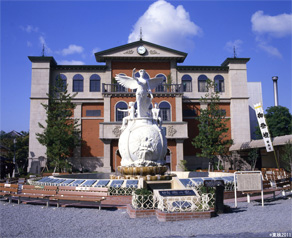 Going through the"Edo Town", you will come to a large Meiji style building in front of a spring. This is "Eiga Bunka-kan". Let’s visit “Eiga Bunka-kan” that is one of the studio’s main attractions. It has valuable film archives so that visitors can learn about history and culture of film. 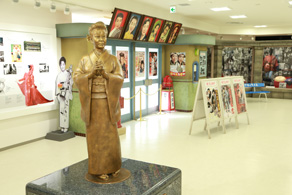 On its first floor, there is Hibari Misora Museum displaying posters, valuable costumes and props to show everything on the everlasting star Hibari Misora who captured Japanese people in every single genre of singing, film, stages. 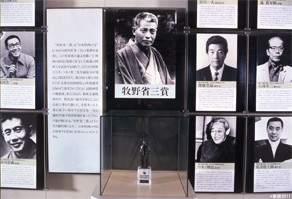 the monument of Sadao YAMANAKA

On the second floor, there is a corner named "Eiga no Dendo", or a hall-of-fame for movies where the photos and mementos of those who have contributed to the movie productions are exhibited. These people are Matsunosuke ONOE, Masahiro MAKINO, Kenji MIZOGUCHI, Yasujiro OZU, Akira KUROSAWA, Kazuo MIYAZAWA, Kinuyo TANAKA, Kin-nosuke YOROZUYA and Hibari MISORA. There is another corner called "Shozo MAKINO Award”which started in 1958 to honor those who have greatly contributed to the movie production. The number of portraits of successive laureates would impress you much. You would be a connoisseur of movies. This is the place where you should come back many times.

Toei Kyoto Studio Park opened on November 1, 1975. The idea was to reinvigorate the publicﾕs waning interest in period dramas as a way of increasing the studio's chances of surviving ata time when the sun seemed to be setting on the Japanese film industry. The company did not invest much in the amusement facility, aiming simply to allow the public to see the studio backlot and the filming that was taking place there. The idea caused a backlash from some actors and TV stations that broadcast period dramas. Nevertheless, the company moved forward with its plans to open it because the studio staff was passionate about protecting the tradition of period dramas. From the beginning, the studio park was a great success, attracting more than 5 millionvisitors in less than three years.
The earnings were invested not only into upgrading the facilities, but also in producing major films for the renaissance of period dramas' just the type of clever thinking you'd expect from the movie people in Kyoto. These new period dramas include The Shogun's Samurai (Yagyu Ichizoku no Inbo, 1978) and Shogun Assassins (Sanada Yukimura no Boryaku, 1979).