The history of Japanese movie production is over one century old. Therefore, Kyoto is the place where the founders of movie business are resting in peace. 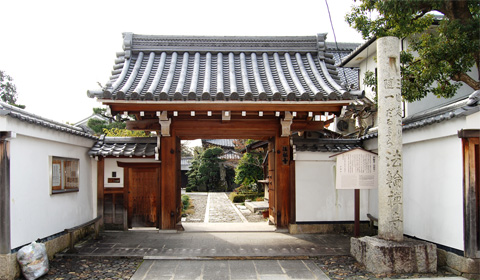 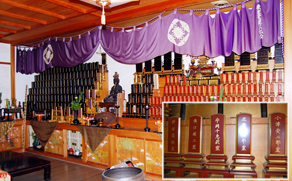 Horinji Temple (Daruma-dera) is located in the east of the bridge over Kamiya River on Shimodachiuri Street near JR Enmachi Station. This temple belongs to Myoshinji denomination of Rinzai sect and famous for Daruma dolls which tumble but quickly return to the upright position. In the temple's premises, there is the Kinema-den Hall, in which the souls of more than 600 people related to movie business are resting regardless of their religious difference. Among them are Einosuke YOKOTA, Shozo MAKINO, Matsunosuke ONOE, Tsumasaburo BANDO, Yasujiro OZU, Kinuyo TANAKA, Raizo ICHIKAWA, Yujiro ISHIHARA and Hibari MISORA. They are the giants of movie production in early days and great movie stars that created the colorful movie era in Japan.

This Kinema-den was established in 1940 by Hirohisa IKENAGA, the director of Nikkatsu Movie Studios who was known for his deep humanity. At the beginning, he constructed an altar for these people in a hall in the garden of his house. Later, he thought that his house was threatened and might be destroyed by the War, so he moved the altar to Daruma-dera. After the death of IKENAGA, Uzumasa-kai, the fraternity of Toei Company continued carrying on his will, and the number of people enshrined here has been increasing. Walking further from Daruma-dera, you will find a temple where the soul of a great movie director from Kyoto rests in peace. 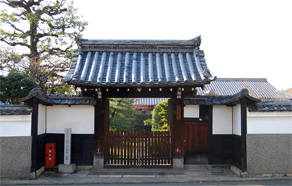 Along Shichihonmatsu Street which is located to the east of Shimodachiuri Street, you will find Daioji Temple among others lined here. Sadao YAMANAKA (1909-1938) belongs to this temple. He was said to be a genius movie director who died very young when he was 28 years and 10 months old because of an illness in the battle field. 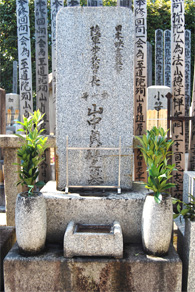 the monument of Sadao YAMANAKA

In the corner of the temple garden, a nice stone monument stands with the inscription "the monument of Sadao YAMANAKA" written by a movie director, Yasujiro OZU to honor his achievements. This monument was erected in 1941 by "Yamanaka-kai" which consisted of those who were engaged in movie business and were attached to Yamanaka. 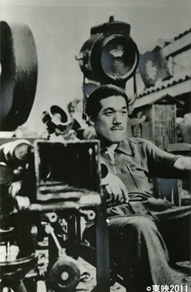 Sadao YAMANAKA was loved by many engaged in movie business. Out of more than 20 movies directed by him, only three movies "Tange Sazen Yowa, Hyakumanryo no Tsubo", "Kouchiyama Soshun" and his last work, "Ninjo Kamifusen" are still left. All of them contain deep insight of human beings and rich humanism. If he lived longer, he would have changed the post-war history of Japanese movie.

A leading film director once said that Kyoto was haunted by the ghosts of filmmakers past.
How true! With more than a hundred years of movie production behind it, you might also say that the ancient capital nurtures "filmmaking yeast." The creative atmosphere is filled with the spirit of the dedicated pioneers of motion pictures who struggled in this city to make good films.
As a new art and new industry of the 20th century, film attracted passionate talent to this city from throughout the nation. The people that came in that exciting time found a creative home here, and after more than a hundred years, most of them rest quietly within its bosom.