FILMING LOCATIONS FROM ARASHIYAMA TO OKUSAGA

Arashiyama is one of the most popular sightseeing spots in Kyoto. Going further from Arashiyama, you will find a quiet and comfortable place called Okusaga. This is a place related to movies where you can enjoy both sightseeing and peaceful feeling at the same time. 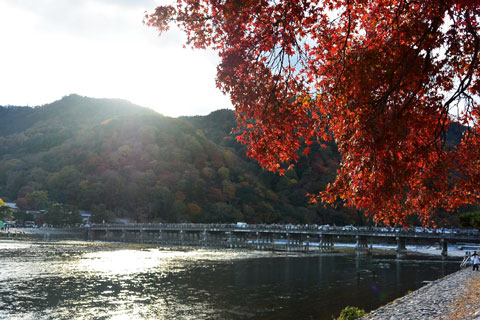 The upper stream of the river from Togetsukyo Bridge is called Oigawa River and the lower stream as Katsura River. Not only the banks of Katsura, but those of Oigawa River also serve as good filming locations with beautiful landscape of Mt. Arashiyama and Mt.Ogura behind.
"Kyoto Arashiyama Misora Hibari Museum" is located near the Arashiyama Station of Randen Line. This is a facility commemorating Hibari MISORA (193789), one of the greatest stars of Showa Era. While being one of the top singers for 30 year, she acted in 160 movies. By using exhibits, amusing gadgets, and audiovisual materials, this museum gives a clear picture of her being not only a singer and actress, but also as a family member who lived in a turbulent period of Showa Era.
(URL: http://www.misorahibariza.jp/) 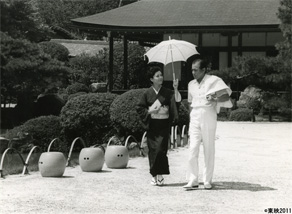 Tenryuji Temple is one of the prominent temples belonging to the Rinzai Sect of Buddhism. The vast premises of this temple has also been a familiar filming location for many movies. The beautiful garden near the main hall appeared in the movie"Seiha"starred by Toshiro MIFUNE and Mariko OKADA. Hogonin, one of the branch temples of Tenryuji Temple has a beautiful garden famous for maple trees since Edo Period and has served as a good filming location for many movies.
Walking further to the north-west from Tenryuji Temple, you will step into the quiet Okusaga area. 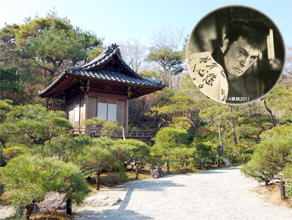 Beyond the dense bamboo forest, you will find the garden of"Okochi Sanso Teien"at the foot of Mt. Ogura. "Okochi Sanso" is the villa of Denjiro OKOCHI (1898-1962), a great star actor of silent movies from Taisho Era to the period after the World War II. It consists of traditional Japanese style buildings and the touring type borrowed landscape garden which overlooks Hozu River. Inside the compound of the temple, there is a museum in memory of Denjiro OKOCHI where visitors can learn about him by the films, panels and his mementos.

Walking further from"Okochi Sanso Teien", there are a number of quiet temples scattered in the area. This scenery has been loved by the people related to movie business. Jojakkoji Temple is located on the foot of Mt. Ogura. Deep in the premises of the temple, the view opens and the premises is wrapped up by crimson leaves in autumn. The name"Jojakko-do"stands for the above scenery which means"the land of eternally tranquil light". The temple serves as an excellent filming location.
Nisonin Temple is where Tsumasaburo BANDO, the King of Samurai Movie has been laid to rest. The stone paved access path starting from Sanmon Gate, and the grave yard covered by heavy old trees were the scenes often used for movies.
The real sir name of Tsumasaburo BANDO is Tamura. Yes, actors Takahiro, Masakazu and Ryo TAMURA are his sons. 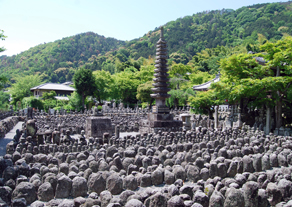 Adashino-Nenbutsuji Temple is the starting point of a road that is linked to the Kiyotaki Trunk Road. About 8000 stone statues dedicated to the souls of dead people without families are standing on the premises gives the impression that life is an ever changing process. There is a stone statue named"Tomu Jizo" under the tree in the premises. The sign board next to the statue says that this statue is related to Tomu UCHIDA, a movie director who is the pride of Japan.

This statue appeared in his movie"Daibosatu Toge". The role of this statue was to give peace of mind to the protagonist Ryunosuke TSUKUE, a blind warrior. Tomu UCHIDA loved to live alone. He placed this unfinished stone statue in his garden and cherished it throughout his life. After his death, the statue was moved to this temple and is watching visitors with its gentle smile. 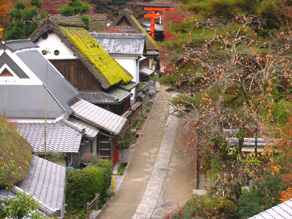 The district called Saga Toriimoto has Adashino Nenbutsu-ji Temple and is designated as a Preservation District for Groups of Traditional Buildings. Its nostalgic streetscape having Machiya townhouses and thatched houses along the approach to Atago-jinja Shrine in beautiful nature appears regularly in period dramas as scenery of a highway connecting Edo (Tokyo) and Kyoto.

The actor Denjiro Okochi (1898-1962) is readily associated with Tange Sazen, a popular periodfilm of the prewar period that featured sword fights. Denjiro Okochi Museum houses a life-sizephoto of the swordsman,who has lost one eye and one arm One of the greatest actors in Japanese film history, Okochi starred in A Diary of Chuji's Travels (Chuji Tabi-nikki) and Tange Sazen, timeless masterpieces directed by Daisuke Ito (1898-1981).
Deeply committed to Zen Buddhism, Okochi spent 30 years building Okochi Villa and Gardenin the Zen style. He personally supervised all phases of the construction, from design to the selection of material. The villa and its garden were literally Denjiro's lifework: in his later years, he spent most of his time away from work, and money, on its construction