Uzumasa, the capital of movie industry and once called "The Japanese Hollywood" started producing new type of movie. 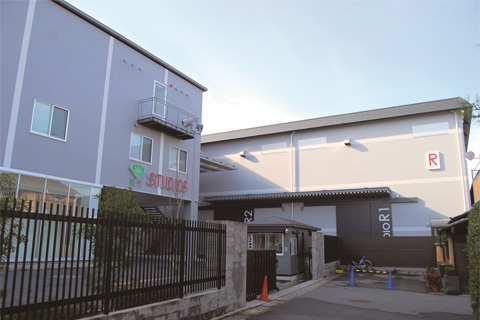 Shochiku Studio is another of the movie studios comparable to Toei Studios Kyoto. Renovated in the spring of 2009, the studios are used also for training staff and conducting joint research by the collaboration of Shochiku Co., Ritsumeikan University and Kyoto Prefecture. 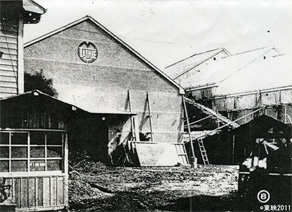 Shochiku Studio also has a long history dating back to 1935 when Masahiro MAKINO established the Makino Talkie Studio. At that time movies were switching from silent to talkies. This studio as well as Toei Studios Kyoto have experienced ups and downs until today.

Most of the works shot here are very familiar to us such as TV dramas "Hissatsu Series", "Onihei Hankacho", and movies such as "226" (1989), "Rikyu"(1989), "Tasogare Seibei"(2002), and "Kamogawa Horumo"(2009). Students of Ritsumeikan University also took part in "Kyoto Uzumasa Monogatari" (2010) in collecting information and shooting, thus, this movie became the first of its kind produced by a joint project entitled the Industry-Government-University.
How the movie industry of Kyoto will develop in the future? The answer will be formed and found here in this studio. As a rule, the studio is not open to public. However, it is open on special occasions. Getting out of this studio and turn to the east, you will find the Katabiranotsuji Station of Randen Line. From here to Arashiyama Station, the final stop, several places related to the movie business are scattered. 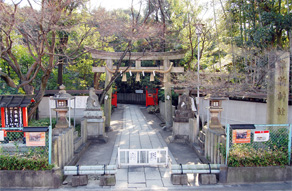 [Kurumazaki Shrine] Soon after getting off the train at Kurumazaki Station, you are standing on the shrine premises. This is a rare type of shrine in that the god of performing arts is enshrined. Various people related to the movie business, including actors and other entertainers visit this shrine. The stone fences in its premises of Kurumazaki Shrine bare the names of many famous movie stars.

[Rokuoin Temple]
Located close to Rokuohin Station, this temple used to be the frequent filming location for several movies. Along the long access way to the beautiful temple, camellia flowers bloom. In autumn, you will find a beautiful "dry landscape type" garden with crimson leaves and green moss with Mt. Arashiyama at the background. 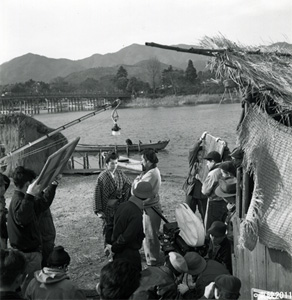 [Togetsukyo Bridge]
The train finally arrives at Arashiyama Station, the final stop. The Togetsukyo Bridge across the Oh-i River creates a special seasonal beauty with the mountains in the background. This bridge often appears in the movies of both period and modern dramas for its beauty.
Arashiyama area is one of the most popular destinations for tourists as well as excellent filming locations for movies.

In the late 1920s, the first great age for period films, in addition to Toei Studios Kyoto described in Chapter 9 there were many film studios in Uzumasa which is in the northwestern part of Kyoto. These included Chiezo Productions Studio, run by Chiezo Kataoka (1903-1983), an actor known for his sword-fighting roles, Narabigaoka Studio, which was used by the production company founded by Kanjuro Arashi (1903-1980), a film star in the prewar period. No wonder Uzumasa was called the "Hollywood of Japan." Several reasons explain why so many studios were located in this area. The first was the low price of land, due to the fact that it was outside of Old Kyoto. Second, lumberyards, which could supply the studios with an indispensable material for making sets, were located there. The lumberyards often seen in old period films were shot at these lumber dealers, which were within walking distance of the studios.