In 2010, Randen(Keifuku Electric Railroad co.,Ltd.)celebrated the 100th anniversary of its founding. You may wonder why the history of movie studios is found along Randen Kitano Line heading to the west. There are many temples including some registered as the World Heritage sites along. 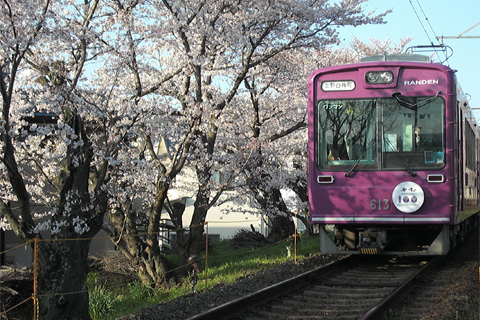 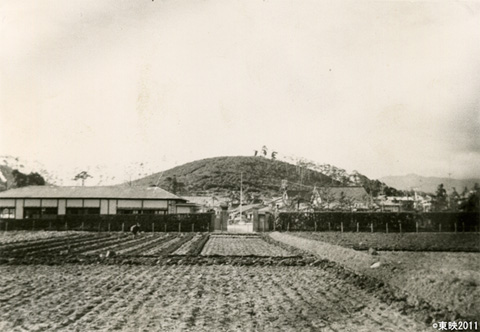 Hop on the train from "Kitano-Hakubaicho" station. The next stop is "Tojiin" Station where Makino established the"Makino Educational Movie Company"The next stop is "Ryoanji" Station where Ryoanji Temple (registered as the World Heritage site) is located. This temple served as the filming location for many movies.
The tofu and vegetarian restaurant called Saigenin in the premises used to be one of the branch temples of Ryoanji Temple where Sadao YAMANAKA (1909-1938), a genius movie director lived with his brother and would write scenarios. 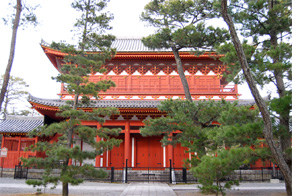 In the north of "Myoshinji" Station, there used to be Makino Production's Omuro Movie Studio which was established in 1925. Unfortunately there is no trace of it today. Here Makino put his heart to producing his fifth movie "Chushingura" with an enormous budget. However, he lost most of his films and his house in a fire that broke in his house. Myoshinji Temple is located in the south of the station. There are several small alleys in the premises connecting the branch temples like a labyrinth which are very appropriate for filming location.

To the north of "Omuro-Ninnaji" Station is the big gate of Ninnaji Temple registered as the World Heritage site. Its San-mon Gate and large premises were used as filming location for a long time.
Soon the train will pass the cherry tunnel heading to Uzumasa. 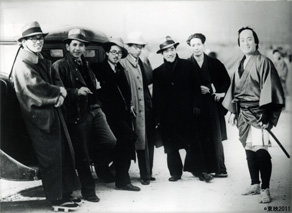 Two stops away from "Omuro-Ninnaji" Station is "Narutaki" Station. Before the World War II, eight scenario writers called Narutaki-gumi used to live around here. Hiroshi INAGAKI, Sadao YAMANAKA and others collaborated with each other to produce one right after the other new and exciting scenarios under the pen name Kimpachi KAJIWARA.
Later, Narutaki became a special place where famous figures in movie business such as Mansaku ITAMI and Raizo ICHIKAWA chose to live there.
Randen Kitano Line will arrive at its final station "Katabiranotsuji" Station while looking Toei Kyoto Movie Studio on its left-hand side. While you are on a tour of visiting temples, at the same time you are studying the history of movie studios. Only Kyoto can provide such leisure.

In the latter half of the 1920s, the film industry lost two of its brightest stars, Matsunosuke Onoe, Japan's first movie star, died at the age of 51 in 1926, and Shozo Makino, the pioneer of Japanese film, died at the age of 50 in 1929. The two deaths brought an end to one era and heralded the start of a new one. Tsumasaburo Bando (1901-1953), an actor famous for his sword-fighting roles, left Makino's studio to establishthe first production agency in Japan to be headed by a film star. A Diary of Chuji's Travels (Chuji Tabi-nikki, 1927), starring Denjiro Okochi (1898-1962) and directed by Daisuke Ito (1898-1981), was highly popular as an innovative period film. Masahiro Makino (1908-1993), Shozo Makino's son, directed Samurai Town, Story 1 (Ronin-gai, Daiichi-wa) by Itaro Yamagami (1903-1945),which was number one on Kinema-junpo magazine's "The Ten Best Films." In this way, the talent nurtured by Shozo Makino continued to breathe new life into Japanese film.