Jidai Festival is one of three biggest festivals in Kyoto. A drum and fife band called Yamaguni-tai heads the procession during the festival. What is the relation between this band and Shozo MAKINO, the father of Japanese movies? 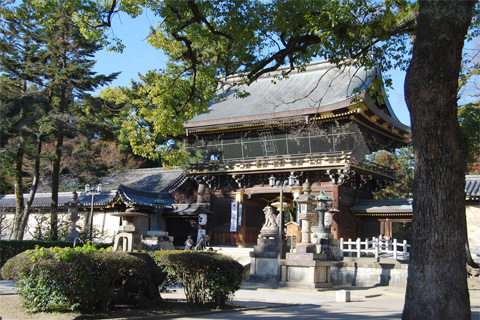 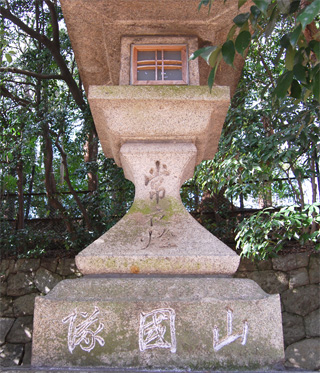 Yamaguni-tai used to be a military troupe consisted of farmers from Yamaguni Village (present Keihokucho, Ukyo-ku)who joined the imperial army to fight in the Boshin War.
There is a stone lantern donated by Yamaguni-tai with their names engraved on it in the back of the premises of Kitano shrine. One of the founders of this troupe was Itsuki FUJINO, the father of Shozo MAKINO. Makino's mother was Yana MAKINO, a Gidayu performer. This was how Japanese melodies deeply permeated into Makino's mind.
Kitano Tenmangu Shrine is associated with performing arts. It is known as the birthplace of Kabuki drama since Izumo-no Okuni, the founder of Kabuki danced here for the first time. In the vicinity of the shrine, pleasure quarters such as Kamishichiken and Goban-cho are located. In Muromachi Period, this area was the gathering place for Furi-odori dance which was in fashion among town's people. Makino run a theatre with her mother and sharpened his sense of art. 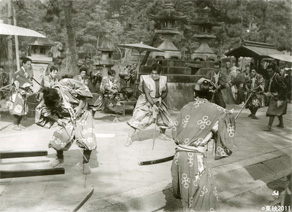 In 1908, eventually Makino produced his first movie. This was the time, when the machine culture of the 19th century was blended the traditional Japanese culture like, Kabuki. So it can be said that Kitano area was linked behind the scene with the birth of period drama. 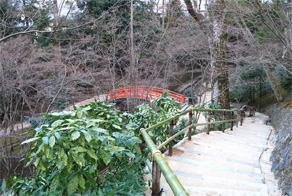 There is a historical monument called "Odoi" (which means a mound)in the premises of Kitano Tenmangu Shrine. This is a part of the mound that used to surround the downtown area of Kyoto in the era of Hideyoshi. There were several gateways that opened to the suburbs of Kyoto. Nagasaka-guchi is one of those gateways located in the north of Kitano Tenmangu Shrine. This is one of the reasons why Kitano area was crowded with people. 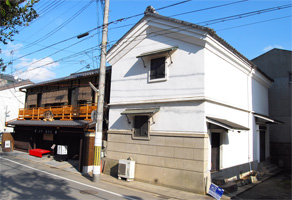 Makino's residence was located on On-mae Street which runs to the east of the shrine. Later it was destroyed by fire. Only the storehouse of the structure is left today. The storehouse is a two storied building, the second floor of which was used for storing films. Since its owner changed, it is no more open to public.

Makino was able to produce many period films because Kyoto was a center not only for the traditional performing arts, but also traditional crafts. The furniture and fabric industries in Kyoto provided vital support for film props and costumes. In particular, nishijin-ori weaving technology proved its worth when craftsmen applied it to repair equipment used in filming. In those days, equipment, much of it from abroad, usually had to be sent back to the manufacturer when it broke down.