KYOTO, A MONUMENT FOR THE BIRTH OF MOVIES 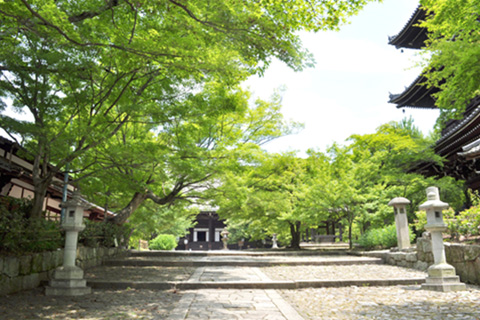 <Shinnyodo Temple>
Shinnyodo Temple was constructed in 984 which belonged to the Tendai Sect of Buddhism whose head temple is Enryakuji on Mt. Hiei. The principal image of the temple is Amitabha Buddha affectionately called "Nodding Amitabha". This image is believed to give blessings to women in particular.
The main hall, the three storied pagoda, the bell tower and other buildings are located in the premises of the temple. Although the temple is reputed for its autumn foliage, it is beautiful in other seasons, too. Usually the temple is a favorite walking place for the people in the neighborhood.

In 1897 when Katsutaro INABATA started the entertainment business of cinematography called" Katsudo Shashin", he entrusted his business to Einosuke YOKOTA (who became the president of Nikkatsu Movie Company afterwards) lived in Kyoto. The documentary film on the Russo-Japanese war (1904 to 1905) he had imported from France became a great hit. Following this, he started expanding his business much more and launched movie making. He hired Shozo MAKINO to direct his movies.
At that time, only documentary and small dramas were filmed which fell far short from today's films with a story. However, Makino had a different idea. His mother taught him Gidayu (singing story telling) when he was a child, so he started a new business at his theatre called Senbon-za. Meanwhile, he continued playing Kyogen comic.
By the request from Yokota, Makino took the initiative of filming a Kabuki drama performed by all the actors of Senbon-za. He shouldered all the responsibilities needed for making a film, i. e., choosing a story, finding filming location, directing, producing and being art director.
Consequently, the movie "Honnoji Kassen" was shot at Shinnyodo Temple. 11 years after the cinematography was imported, a story film was born in Japan. 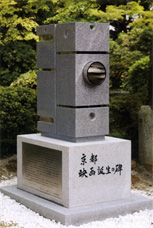 Kyoto, A monument for the Birth of Movies

In 2008, the city of Kyoto and some people related to the film industry constructed the monument "Kyoto as the Birthplace of Movies" with the inscription of "Kyoto - the place of Centennial Movie Making" in the premises of Shinnyodo Temple. 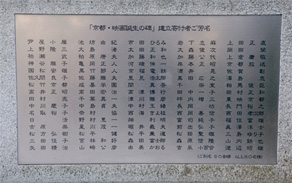 Unfortunately, even a fragment of the movie of "Honnoji Kassen" is not left. However, the flier of the scene of fighting at the main hall of the temple is still left. It is so interesting to imagine Makino holding a camera to shoot a scene where Ranmaru MORI is fighting. 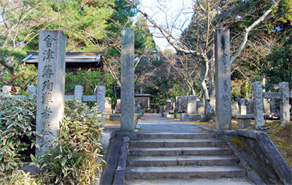 The tombs of warriors of Aizu Dom

Turing right from the main hall of the temple down to the south leading to the grave yard, one can find a three story pagoda and the panoramic view in front. Soon you will find out that this is Konkai-komyoji Temple, or affectionately called Kurodani-san. This temple was turned into an army base for Katamori MATSUDAIRA, the Director of Kyoto Office of Tokugawa Government at the end of Edo Period. The tombs of warriors of Aizu Dom are here. 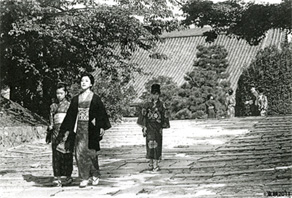 Kurodani-san has also been a frequent filming location for movies from the past until present. You must be familiar with its large San-mon gate in the scenes of movies and TV dramas.

In addition to scenic locations that transform from season to season, having served as Japan's political and cultural center for centuries, Kyoto features a host of historic sites, including Buddhist temples and Shinto shrines. Its historical landscape is a major reason that the ancient capital became a Mecca for filmmakers.
Movie people in Kyoto made the most of these unique locations for their films. Such locations were sometimes used as is to represent historically accurate settings; and at other times they were skillfully employed to represent other locations. In one of his films, Shozo Makino (1878-1929), the pioneering director of Japanese film, used the latter technique, called mitate in Japanese, quite impressively.
Mitate is one of the major features of film production in Kyoto.